This document describes the high-level ALM PRO+ architecture. Which components are involved and how they communicate with other components within the network. Also, this document will provide an overview of the requirements and the data traffic flows between the components.

With ALM PRO+ organisations can now truly benefit from Extension Mobility using a localised or centralised solution for all ALM clients. ALM PRO+ is an add-on to ALM PRO and adds the following features:

The localized solution requires one ALM PRO+ (front and backend) instance per CUCM Cluster. The ALM PRO+ Server is situated within the same network, or VLAN, as the CUCM Publisher Server.

In the situation of multiple sites or regions, multiple ALM PRO+ servers must be deployed. There will be no synchronisation between these servers.

This is useful in situations where the ALM clients cannot communicate with other parts of the network across the WAN, for example if there is no routing available or if there are Firewall rules or ACL’s in place which prevent communication between these components. 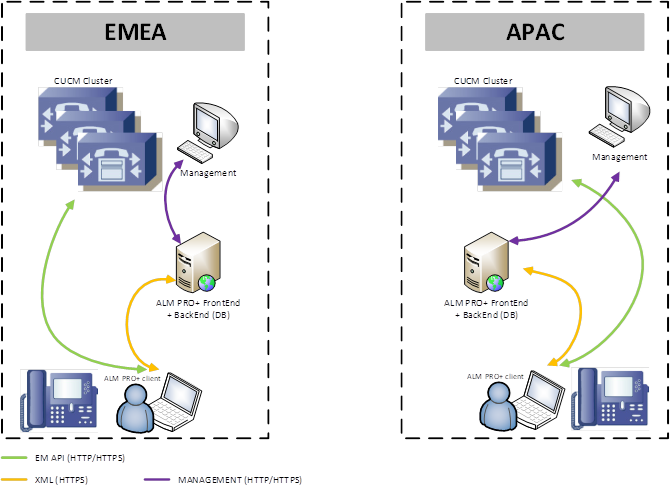 The centralized solution requires one ALM PRO+ Frontend instance per region. An ALM PRO+ Server should be situated within the same network or VLAN as the CUCM Publisher Server.