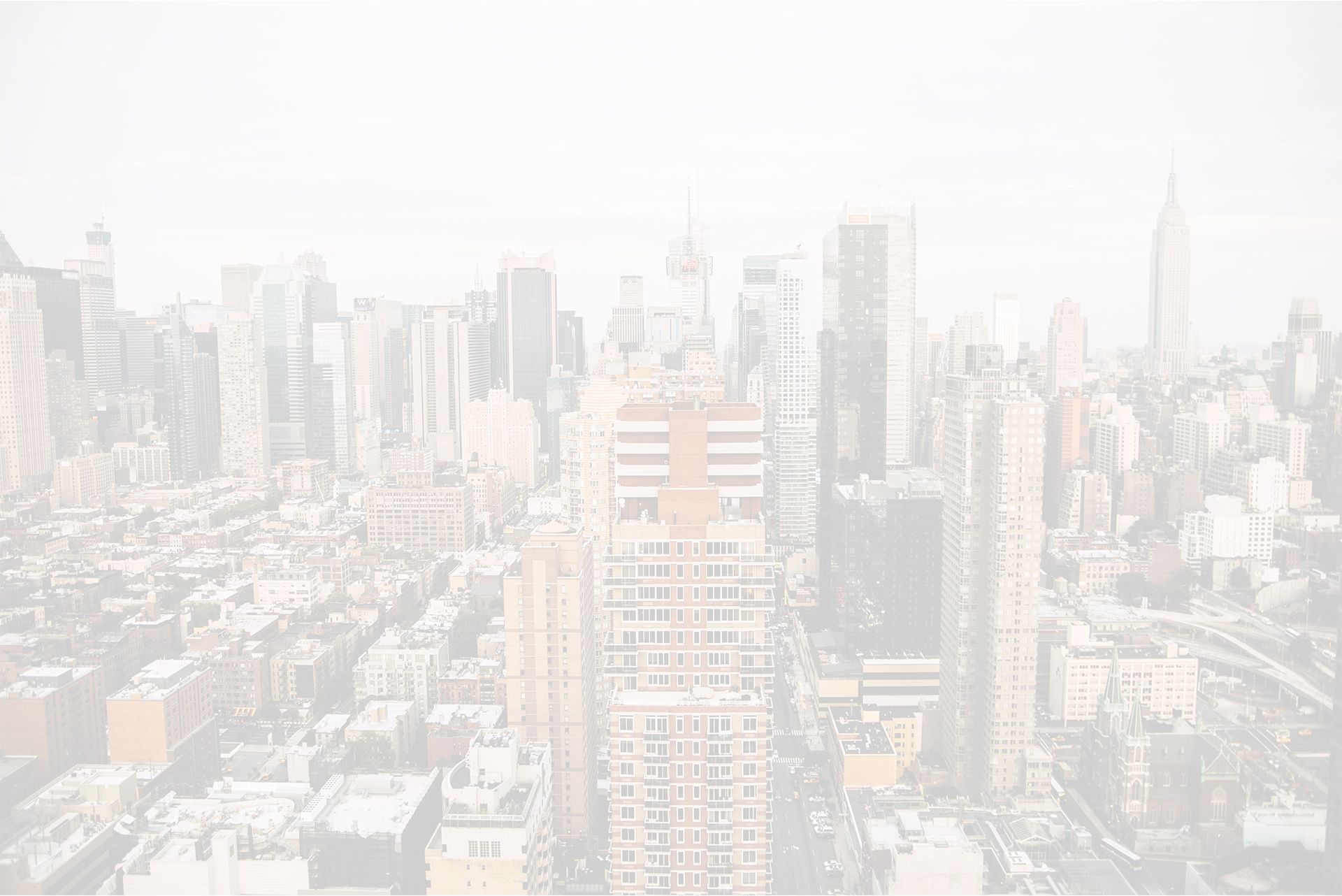 ALM – the single sign-on solution – has two modes of operations.

This document describes the second situation, for other situations, please refer to the standard

Configuration of fixed phone mappings
For ALM to find the correct phone in a virtual environment, it needs to know which terminal is connected to which phone. In order to facilitate ALM one of the options is to use a mapping file.

Now populate this file, either by import it from another system (e.g. export the Extension Mobility profiles from the CallManager using the bulk import/export tool) or use additional tools to automatically create and update this file (see next paragraph).

When done, store this configuration file at a central location which is accessible by all Terminal Servers, e.g. a network share

Deploy and configure ALM
Deploy ALM to all Terminal Servers that will be used by users running ALM. Either manually login to the virtual desktop or run the setup file (When using Windows Vista and above, use right click, run as administrator) or run the unattended setup. See document “ALM installation instruction for scripted roll-outs”.

Then configure ALM to use the mapping file created in the previous chapter.

For individual instances, open ALM and click the Options menu at the top, then select “Admin Settings.”, on the first TAB select “Linked to mapping file” as the Detection method and browse or enter the path to the mapping file in the filed “Location mapping file (.csv)”. 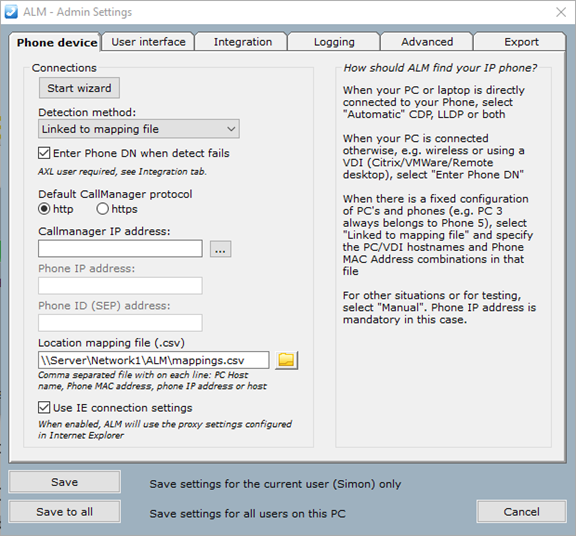 To automate the deployment of these settings to all clients in the organization, create the settings once, then export the registry key HKEY_CURRENT_USER\Software\Alm and deploy this export file (e.g. using the login script of each user) together with the deployment of the ALM client software. Depending on your organization’s software deployment tools, several options exist to facilitate, please consult RSconnect for support on this topic.

Optionally the settings can be exported using the Export function on the Export TAB within the Admin Settings. 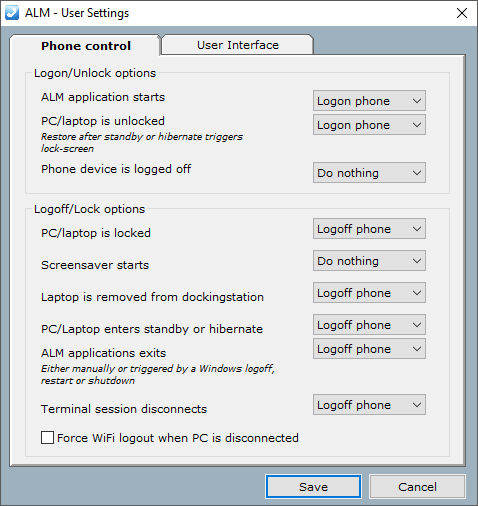 When ALM is started from a Terminal Server environment, by default it has the option “Log off when terminal session disconnects” ticked. When a user closes his terminal client, switches it off or clicks the close button in a remote desktop session, ALM will detect this change and log off the mapped phone for this user. When it’s unchecked, it will only log off the phone when the same user logs in into another terminal client using the same username. 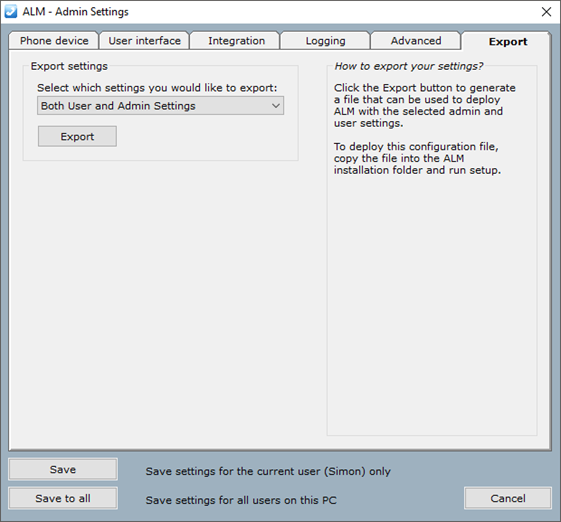 > Standard installation
Suitable when the PC or laptop is connected via the phone and running Windows operating system. See page 6, green rectangle areas.

Deploy ALM to the client PC or laptop, either manually or using the unattended setup script included. ALM will detect the connected phones by using CDP or LLDP protocols (configurable) and communicate to the CallManager using HTTP(s), see page 6.
PC or laptop needs a network connection to both the IP phone and the CallManager (direct or via proxy)

> Terminal clients/wireless IP Phones with static configuration
Deploy ALM to the client PC or Terminal server
Configure or import the relationships between terminal clients/desktops and IP phones by adding pairs of ((Computer name or IP address) and (Phone MAC address/Phone host name)).
This file needs to be maintained when configuration changes, e.g. a phone is to be replaced or connected to another PC or terminal client.

> Terminal clients/wireless IP Phones with dynamic configuration
Deploy ALM to the client PC or Terminal server.
A configuration file is automatically created by an ALM background service (ALM Inventory Manager*1). The ALM-IM application scans IP address ranges of the devices configured in the CallManager. For each phone found, ALM-IM reads the required data from the device including the computer name of the connected pc/client. The computer name will be either configured by the CallManager administrator at the phone configuration page or automatically updated by a CDP/LLDP broadcaster*2 to be installed/deployed at the client terminal. 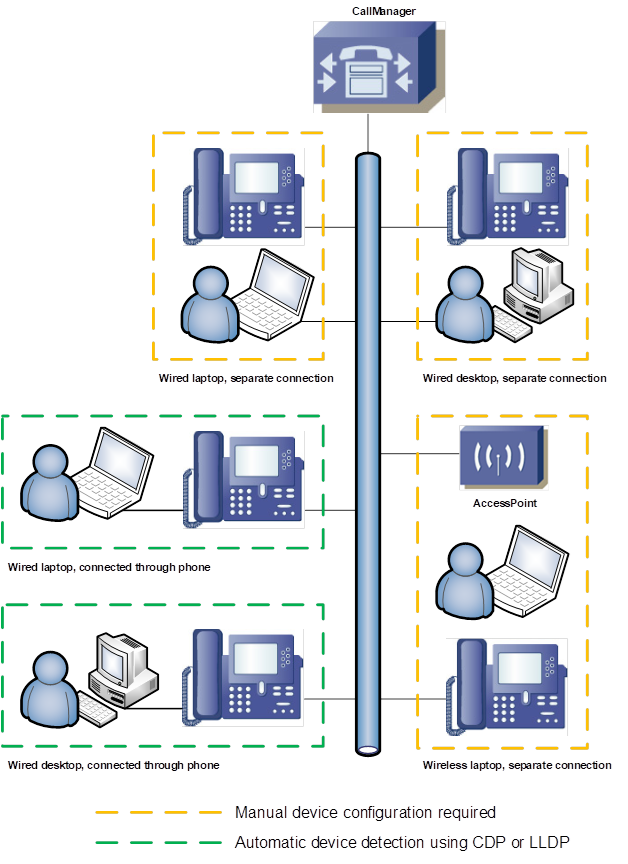